Cowbells are among these percussion instruments that you often make fun of, a little bit like the triangle.

And that’s because people think it’s enough to hit the instrument without thinking about it.

Well guess what? They’re wrong! There’s much more to the cowbell than just hitting without thinking.

A core part of Afro-Cuban and Latin-American music, you’d be surprised how hard a cowbell can groove when you know how to play it correctly…

And it will add some serious rhythmic structure to ANY song.

On top of that, it’s an excellent addition to any drummer’s set up, whether on the drumkit or on a percussion set up.

So whether you play;

Or really any other music with some rhythm in it…

The cowbell is a sure way to make people want to stand up and start moving.

And so for today’s article I decided to compile the best models out there… And some more.

A Little Bit of History

If the origins of the cowbell sound pretty obvious — indeed it was originally borrowed from cattle — It is not known exactly when people decided a cowbell would sound good in music.

What is known, however, is that the cowbell first appeared in afro-cuban music. And this little, simplistic looking, but in reality much more complex instrument gained so much popularity…

That it became virtually ubiquitous to all music genres, and maybe more specifically to rock…

So much so that today you can find cowbells specifically designed for rock music, as you’ll see in the list down below. The LP Black Beauty is a high pitched, affordable cowbell. It’s one of the most popular cowbells out there and you’ll probably have to look for a long time if you want to find a negative review.

The Black Beauty is actually available in 2 sizes: 5″ and 5.5″. The bigger ones, called the Black Beauty “Senior” produces a louder sound and is tuned a full step below the regular Black Beauty. If you are a drummer and you are used to browse Youtube to improve your playing skills, you might have stumbled upon Mike Johnston’s channel.

Owner of a drum school in Sacramento, CA, he became famous on Youtube for posting short, but concise drum lessons videos.

The reasoning behind the cowbell’s development is that he wanted a “true” drumset cowbell.

In his videos, Mike states the reason he wanted to create a custom cowbell is because he could never quite obtain the desired tone. But by adding 2 “mutes” to the bell, he managed to create a truly customizable sound.

Check out the video to hear the tone of this cowbell: Another serious player on the drum scene, Pearl is actually not exactly famous for its work on the percussion area.

However, this particular cowbell model is EXTREMELY popular, for some reason.

Typically, cowbells that are labeled “rock” are wider with a bigger “mouth” and produce a lower tone.

This one in particular is also much cheaper than the previous model, while still being made by a reknown drum brand. 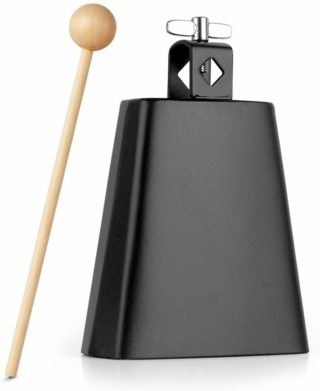 Here’s a pretty generic and cheap cowbell. The thing is, it comes with pretty much everything you need:

On top of that, it’s extremely well reviewed.

So what could you ask more? I wanted to include something different in this list, and while agogo bells aren’t exactly cowbells, they are still played the same.

Originating from west Africa, it has mostly gained popularity thanks to the Brazilian samba famous groove.

So if you’d like to give agogos a try, definitely pick up the LP Standard Agogo as they are the most sold agogo right now, on top of being made by one of the biggest percussion instrument maker.

Check out this video for some tips on how to play the agogo:

The cool thing about these agogos is that can be mounted on a drumkit, or any other percussion set-up for that matter thank to this accessory:

Also check out Meinl’s take on the agogo: Still not exactly a cowbell, jam blocks kind of serve the same purpose, which is why I decided to include on in this list.

LP’s jam blocks in particular are supposed to replicate the sound of a wood block, which is essentially the same instrument but made out of wood instead of plastic.

They can be a great addition to any drumkit or percussion set up. And since they’re available in many different sizes, using them together can create some sweet effects.

I know what you’re thinking:

Well, what can I do, they’re a major, if not the BIGGEST player on the percussion scene, so it’s only natural we keep see them pop up on this list.

This model is openly directed at rock drummers, with a plastic piece made to dampen the sound and prevent dents from heavy hitters.

While latin music cowbell need to have a very sharp attack and sound as bright as possible, rock bells need to blend in, which is the purpose of the little plastic piece.

Check out this video to see what it sounds like:

Also check out Red Hot Chili Peppers’ Chad Smith’s signature which is essentially the same but in red: For the last pick I chose a highly versatile cowbell.

Indeed, the Meinl Russ Miller Signature has an incorporated “dampening mechanism” allowing to precisely choose how much sustain they want to get out of the cowbell.

Take a look at the video below to hear the different levels of dampening: