No matter what style of music you play…it seems like everyone develops a crush on the ukulele at some point.

But regardless of which of these categories YOU fit into…

When you first start out with the ukulele…

It’s tough navigating through the endless sea of information to find the one best suited for you.

So to help you through the process, I’ve compiled the following guide for ukulele beginners… Your first job is to narrow down your options to 1 of 4 sizes:

The default option that most beginners start with is the soprano…since it is not only the “standard” size, but also the cheapest and most portable.

However, the concert and tenor sizes have their own set of advantages as well, the main ones being:

So any of the 3 smaller ones will do fine as a “first uke”.

However, because baritones do not use the same GCEA tuning of the other 3, I wouldn’t normally recommend them for starters.

Unless of course…what you really want is a mini guitar that sounds like a ukulele…as many guitar players do.  In that case, a baritone is perfect.

Once you’ve settled on a particular size, the next task is to narrow your options further by comparing features.

And of course… the most important features are those that have the biggest impact on sound/performance.

So what exactly makes one ukulele sound different from another?

So up next, let’s examine each one in more detail.  Starting with… The 2 most popular ukulele woods are undoubtedly:

Then its worth knowing that for most Hawaiians, koa is the one and only wood that ukuleles should ever be made from.

Since koa does not grow naturally anywhere in the world outside of Hawaii…it’s rare to find non-Hawaiian manufacturers that regularly use this wood.

So the next most popular “all-around” wood is…mahogany.  Mahogany is the only other wood that can be used across (mostly) an entire ukulele and produce a sound quality that rivals koa.

Beyond these 2 woods, what you typically see is multi-wood ukuleles, which use different woods for different parts of instrument, similar to how most other acoustic instruments are made.

Very often, these multi-wood ukuleles tend to be lower in price.  But not always.

Instead, the more reliable sign of a cheap ukulele is the use of laminate wood, which hides a less-expensive wood on the inside, covered by a thin layer of better wood on the outside. A few patterns emerge when comparing sound quality and price.

And in the studio, while it may be easier to just plug-in an acoustic-electric to your audio interface…

You will almost certainly get a better sound with an acoustic and a well-placed condenser mic. Compared to other stringed instruments…

One thing you’ll notice about the ukulele is that it can be insanely hard to keep it in-tune.

And mainly because of their tuning keys.

While better tuning keys will:

…cheaper tuners can be extremely unpredictable…driving advanced players insane, and leaving beginners confused and frustrated as to why their ukulele always sounds terrible.

Without getting into too much detail here, just know that as price goes up…so too does the quality of the tuning keys (at least ususally).

One useful piece of information definitely worth mentioning is: turning ratio.

With cheaper models, you typically find a 1:1 turning ratio, where the slightest turn can result in a relatively large change in pitch.  BAD!

However, with higher turning ratios, the same sized turn will result in a much smaller pitch change, ultimately allowing for more precise tuning of each string. 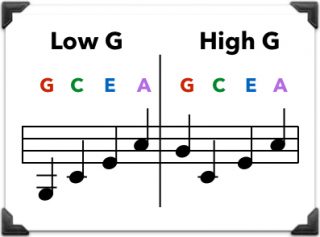 Has a 4th string that is tuned a perfect 5th UP from its 3rd string.

The alternative to this tuning, which is actually quite common, is Low G tuning, which drops the 4th string DOWN a full octave so that it is a perfect 4th down from the 3rd string.

For beginners, the differences between these two tunings are of little consequence, since the chord shapes and strumming techniques are the same either way.

But as you get more advanced, the difference between a low and high G string becomes more apparent, and you will naturally prefer one over the other.

Logically, the Low G tuning makes more sense, because it provides more bass for your strumming, and a wider octave range for your melodies.

But ultimately, every player has their own preference.

The good news here is…you can easily switch between a high and low G string at anytime.  And with most ukuleles, you can do so using the same nut (depending on how it’s cut).

So no worries here. At least we’ve reached, the final, and in my opinion…

Most important factor in the sound of a ukulele:

More than anything we’ve talked about thus far…

The craftsmanship and skill of the manufacturer is perhaps the biggest factor in determining the overall sound quality (and value) of any ukulele.

With a great brand, you’re pretty much guaranteed a great ukulele.

Does that mean you need a big name-brand to get a great sound?  Of course not.  There are plenty of boutique ukulele makers that make instruments as good or better than anything out there.

However…for beginners, it can be difficult if not impossible find and accurately assess the quality of these ukuleles from face-value alone.

Which is why it’s best to stick with the top brands at first…at least until you know better.

So up next let’s check out 6 of the top brands on the market today. Founded back in 2005 by owner Mike Upton…

The Kala Brand Music Company is a popular mainland (not Hawaiian) company operating out of northern California.

Currently they make over 120 variations of ukuleles…

And are particularly famous for their one-of-a-kind bass ukulele known as the Kala U-Bass.

In addition, many of their most popular acoustic ukes are found in the sub-$100 range, making them a great first option for beginners on a budget.

Among these cheaper models, here are some of their most popular and well-reviewed options:

Part of the Hohner music company, and a currently quite popular with the indie crowd…

Lanikai is a brand owned and operated entirely out of Hawaii…

But more specifically from the Island of Oahu.

Using the top 1% of Koa from the Big Island, you might say that these ukuleles are about as authentically “Hawaiian” as it gets.

Interestingly enough, Jason Mraz and Robert Plant are included among the top names supporting the brand.

But then again, the average price point of a Lanikai uke is geared more towards beginners and dabblers, than toward seasoned pros.

As the final 3rd option in the category of “budget brands”…

We have Ohana ukuleles.

Surprisingly, several of their ukes are made of solid mahogany yet priced in the sub $200 range.

And they even have a few koa models as well.

While there is little information available online about the brand itself, rumor has it that these instruments are made in China as opposed to Hawaii or the USA…

Which isn’t necessarily a negative in itself, but it does raise some eyebrows, doesn’t it?

The biggest apparent upside of this brand is its broad distribution network all over the World, unlike many ukulele companies who only have retailers in Hawaii, the Mainland USA, and Japan.

So if you live someplace where ukuleles aren’t easy to find, this brand may be your best bet.

Here are some of their most popular models: Up next we have the odd ball of the group…

As you can see from the picture, what they eventually created was a ukulele design all their own…

And it didn’t take long for this new line to become a massive success. As the reigning King of all ukulele brands…

Building koa ukuleles from his home in Kaimuki, Hawaii.

After that point, it didn’t take long before Kamaka Ukulele and Guitar Works became known as makers of perhaps the highest quality ukuleles on the planet.

Not only did they sound the best…they were the most beautiful as well.

Many of Hawaii’s local musicians consider Kamaka to be the one and only brand worth playing.  And it is a household name, even among non-musicians.

The only downside of the Kamaka brand is that despite their amazing product, they have yet to expanded their territory very far outside of Hawaii.

So if you don’t live in Hawaii, you’re not likely to ever find one at your local music store.  Or even on Amazon!

But the best place to starting searching is definitely here on Kamaka’s product page.

Here are their most popular models to check out: For the last brand on the list, I’ve saved the most expensive one of them all: Martin.

While we all know that C.F. Martin & Co makes some of the best (and most priciest) acoustic guitars money can buy…

You might be surprised to learn that they make some damn fine ukuleles as well.

And they’ve been doing it since back in the early 1900’s at the height of the ukulele craze.

Today, their vintage ukuleles fetch outrageous prices from collectors, and their new high-end models such as the 5k cost several thousand dollars each.

While they may not be Hawaiian made, few will argue that they are the one brand that sounds just as good as any Kamaka, and some say…even better.

Here are a few of their best selling models:

So…How Much Should You Spend?

Now that we’ve gone through all of the top brands, and you’ve seen many of the best options on the market…

You may have noticed that the price ranges can vary a ton…starting as low as $50 and going all the way up to well over $1000.

How much should YOU spend, RIGHT NOW?

Assuming that you’re a total newbie, and this is your first ukulele, the best answer I can give you is…somewhere in the $150-$300 range.

In my opinion, it is in this price range that you will find the best value for your money.

Are there quality ukes that can be bought for cheaper?  Of course.

Having said that, we all have different budgets, so feel free to disregard this info if you think it makes sense to. For some strange reason…

The ukulele is one instrument that inspires endless numbers of:

And while most people wouldn’t consider these “serious” instruments…

They can definitely be a source of both:

So let’s cover a few of them now, shall we?

Other notable “ukulele hybrids” include:

How to Restring and Tune Your New Ukulele

Once you’ve finally got your hands on your new ukulele, there’s one final step before you’re ready to start playing…

You gotta string it up and tune it.

Earlier in this post we talked about how quality tuning keys are important if you want your ukulele to stay in tune.  However, this is not the only factor.

Two other huge factors are:

Unfortunately, the ukulele is one of the more difficult instruments to string properly, so you’ll want to take a while to make sure you understand exactly how it’s done.

So here’s a great video I found that walks you through the process step by step: