In the world of instruments, the mandolin is kind of an ugly duckling.

Ask mandolin players how they’ve ended up playing the mandolin, and chances are many of them will tell you:

Well I wanted to play in a band but there was already a guitarist and a fiddler, so I had to go with the mandolin

Which is one more reason to start playing it!

And while its sound is mostly associated to folk or bluegrass music, some players became genuine virtuosos on it by playing different genres, such as rock or jazz.

So if you’re looking to learn more about the mandolin, you’ve come to the right place as I have in today’s article everything you need to know about this instrument.

A Little Bit of Mandolin History Like all plucked string instruments, the mandolin’s origins are ancient and scattered around the world.

However, the mandolin as we know it today is not that old and can be classified under one of these 2 categories:

And although pretty much every region in the world has its own variant of the mandolin, in this post I’ll be  focusing on the American/bluegrass mandolin.

So let’s now learn more about these 2 instruments.

The most important characteristics to take into consideration when shopping for a mandolin are:

So let’s now see all of these categories in more details, shall we? 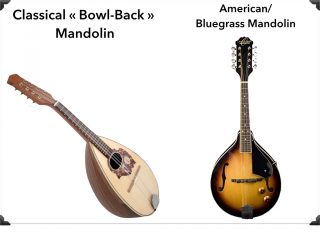 The very first question you should ask yourself is whether you want to play on a classical mandolin… Or a Bluegrass mandolin.

And while I’m guessing you’ll likely lean toward the Bluegrass variety, know that both classical and Bluegrass mandolins share the same tuning…

So you can always switch back and forth between both instruments if you feel like it.

Check out the video below to hear the differences:

Now let’s see both these models in more details, starting with… So if you want to play classical pieces, this is the mandolin you’ll need.

Mostly played in solo settings, they have a much less projecting sound with a lot less bass, compared to bluegrass mandolins.

In terms of construction, they are made of various wood staves glued together to form the back, whereas American mandolins can be carved into single pieces of wood and have a flat back.

Here’s a typical classical piece played on the classical mandolin (Note that the big mandolin-like instrument is actually a mandocello, which we’ll cover further down)

So if you’re looking for one of these, here are the models I recommend: When you mention mandolins in the US, this is the variation that comes to mind for most people.

It was actually the first instrument Gibson created and patented, even though the company is nowadays mainly famous for its guitars.

There are 2 body styles are:

Both styles have a flat back, making their production costs lower than a classical bowl-back.

Now, the difference between A-style and F-style models is purely cosmetic – both types are built the same and sound the same, but the F-style mandolin has more ornaments – more specifically the “scroll” on the top left side which raises its cost.

BUT, the truth is, you rarely see bluegrass mandolin players playing an A-style.

Here’s an example of typical performance:

So if this is the type of mandolin you’re looking for, here are the models I recommend: There are 2 types of sound holes:

That is why F-shaped holes mandolins are usually recommended for bluegrass music, or any other genre in which you need to play loud…

Whereas round hole mandolins are generally used in Celtic and folk music, where they need to blend in more.

Classical mandolins all have a round hole as they’re essentially meant to be played on a solo setting and don’t require as much projection. The type of wood AND the building process define the sound of the mandolin.

Mandolins almost always use different woods for each part, but for the top (or soundboard) which in terms of sound is the most important part, spruce is used for an overwhelming majority of mandolins.

You might also encounter cedar soundboards to a lesser extent.

As for the construction process, there are 2 techniques:

Now, in terms of sound, most sources agree that solid construction is the best because a single piece of wood vibrates much more than various layers of wood glued together, thus delivering an overall better sound.

On the other hand, laminate mandolins are cheaper to build, but because of that, mandolins makers generally don’t specify the building process if it is indeed laminate.

So as a rule of thumb, just know that if you see solid spruce on the description of a mandolin, well it is what it says it is, and if you see ONLY spruce, without “solid” written before, it is most probably laminate wood.

As for the other parts, they’re usually made of one of the following woods:

How to choose a pick 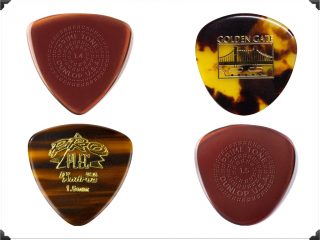 Mandolins are played using picks, even though some players play with their fingers. Generally though, and especially for beginners, most sources advise to use a pick.

Furthermore, these sources advise to use the HEAVIEST pick you can stand, and that is because if you choose a thin pick, it might bend when hitting the strings.

When the pick bends, it creates a sort of lag between what you want to play and what actually comes out of your playing, which you definitely want to avoid.

For a detailed guide about picks, check out this post:

Now, even though there technically aren’t specific mandolin picks, some brands still label some models as “mando” picks.

These picks are thicker and stiffer than guitar ones, usually ranging from 1.4mm to 2.00mm, instead of 0.40mm to 1.2mm for typical guitar picks.

So here are the picks I recommend: So playing the guitar already won’t help you much there, you’ll have to learn the chords shapes all over again. On the other hand, reading tabs should be fairly easy since the mandolin only has 4 (courses of) strings.

Also, if you happen to already play the violin, like many mandolin players… You’ll have no trouble working your way around the mandolin, as both instruments share the same tuning.

Choosing strings for mandolins is essentially the same process as for guitars. You’ll have to consider gauge and material. If you want to learn more about strings, check out this article:

So here are the strings I recommend: The mandolin has countless variations. And among these, here are the most popular ones I want to cover next:

So let’s start off with…

Just like with guitars, there are electric, as well as acoustic-electric mandolins…

Now, some electric mandolins have single-course strings, meaning they only have 4 strings instead of 8 for regular mandolins. If you’re wondering why, well the only rationale given by constructors is for the mandolin to feel like an actual guitar.

Have a look at this video to hear what an electric 4 string mandolin sounds like:

So if you dig this sound, check out the models I recommend:

Octave mandolins are set one octave lower than regular ones, making them sound closer to a guitar in term of pitch.

Check out this video to hear what they sound like:

Here is the model I recommend:

The mandocello is often described as being to the mandolin what the cello is to the violin.

So if you happen to play the cello already and feel like experimenting a pluck string instrument tuned the same, here’s your chance.

Check out the video below to have a listen at this instrument:

Here is the model I recommend:

Lately, some manufacturers have been making 5 string mandolins. They’re set one octave lower than regular ones.

So why not just play a regular guitar then?

For example, a violinist who wants to start playing the guitar will find it much more convenient to actually play the mandolin, because it is tuned the same as the violin…

And with 5 strings mandolins you also get an extended range of note. Also some people prefer the single course of strings, instead of double strings on regular mandolin.

String mandos are often use in jazz, as you can see in this video:

Now, these mandolins are mostly custom made so they’re not really easy to come by. But if you still care to try one, check out this luthier:  Jonathan Mann