No matter how much we all love our guitars…

There comes a time for every guitar player…

Where the initial romance of EADGBE wears off…

And the eye begins to wander, fantasizing on each and every one of those other stringed instruments he has yet to conquer.

And then sometimes…it’s the dulcimer.

It’s great for so many things…

And if you’re reading this post, I’m willing to bet you’re researching dulcimers now for one or more of these exact reasons.

So up next I’ll show you 7 of the top dulcimers on the market today, and along the way, give you some key beginner tips about the instrument itself. 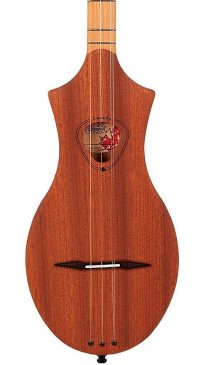 If you’ve done any research on the instrument itself, you know that while dulcimers can have many different string counts/arrangements…

The two most common strings counts are 3 and 4.

As you can see in the picture, the Seagull Merlin SG has a double treble string, making it twice as loud as the drone strings.

As opposed to lying on your laps for a traditional dulcimer.

So if you’re already used to playing the guitar, that might be a decisive factor for you.

It is available in mahogany and spruce models. Check it out:

This dulcimer is made out of cardboard, hence its very low price.

But, surprisingly enough, even though it’s super cheap, users have been reporting a very nice sound.

So you can start playing right away.

Another detail about this dulcimer is that it has 3 strings.

Well keep looking, because there is no single answer to that question.

The only thing people generally agree on is that 3 strings dulcimers are easier to play on, and therefore are recommended for beginners.

Anyway if this dulcimer is what you’re looking for, check it out: The Apple Creek ACD100 is also a great beginner, or “student” dulcimer…

Which, in other words, simply means its made of cheaper materials, such as the laminated wood for example…

Which is still more resistant than the cardboard used in the previous model.

So if you want a good sounding, decently made, cheap dulcimer, the Apple Creek ACD100 is probably the best choice around. The Roosebeck Grace Mountain has various added features, such as:

So while the 4 string model offers the regular “string layout”: 1 bass drone string, one mid string and a doubled melody/treble string…

But the real added feature of the 5 string version lies somewhere else:

It has an extended fretboard with 2 additional frets, the 6½ and the 13½, no longer making it a diatonic instrument, which is a pretty big deal…

And opens a lot of new possibilities, including:

So since this dulcimer technically offers MORE notes than the previous models, it might not be the best choice for complete beginners…

But if you play the guitar or just know your way around it, this option might be more suited for you, since it is sonically not as limited as the previous ones. This series of models uses a different design than the traditional laptop one, making these dulcimers more similar to guitars/mandolin.

The difference between each model is the shape of the soundhole. There are 3 models:

And this is a purely aesthetical diifference, you won’t note any difference in sound between these 3 models.

Now, just like for the previous model, this series also offers an additional 6½ fret, but NO 13½ additional fret, so keep that in mind when considering it.

All models of this series are 4 string models with doubled melody string.

Again from Roosebeck, here is the Trail model.

And this is basically the same instrument as the series we just covered previously, but in a more compact format.

While still prefering this type of design.

If you’re looking for a “true” Appalachian mountain dulcimer…

Then you might want to take a look at the Johnson FI-220.

With a traditional design featuring:

On top of that, the Johnson FI-220 also comes with a custom carying case.

So if you’re looking for the real deal at a low price, this is undoubtedly your best bet. Which is a shame since some dulcimer manufacturers themselves recommend you change the instrument’s string right off the bat.

But luckily, 3 of the best ones still do.  And these are:

So if you already play the guitar you’re almost certainly familiar with these names, and are aware they are authorities in the field.

Which is a good thing since it means you can buy these sets fully rested, knowing that quality-wise, they’ll deliver.

Now, something Dulcimers manufacturers won’t always tell you, is that you can actually buy ANY steel guitar string for your dulcimer…

As long as you use the correct gauges, which are:

As for how to restring your dulcimer, the easiest thing to do is to watch a video tutorial, such as this one: