As home studios evolve into their maturity…

In favor of the pricier, but generally higher-quality rackmounted gear, commonly seen in pro studios.

However, assembling your first rack is often long and complicated…

And filled with a ton of questions that need answers.

To help you through the process, in today’s post…

I’ve assembled this simple guide for you to follow, once you’ve decided that you’re ready to tackle this important upgrade to your studio.

What Belongs in a Studio Rack Mount?

When building their first rack…the biggest challenge beginners face is that they have no idea what actually goes inside a rack.

So let me show you…

For a basic home studio rig, there are 5 key items you’ll likely need.

You won’t need to buy them all at once, but rather…you’ll add them gradually over time, as your needs evolve.

Here’s how it usually happens:

The Typical Story of Growth

As you gain studio experience, there eventually comes a point when you wish to record several-tracks-at-once…

The problem is…beginner setups rarely have enough inputs to tackle this job.

So the first “rack item” most people add is a  multi-channel mic preamp, such as the ones in this post:

After you buy a rack to put it in, the next upgrade you’ll IMMEDIATELY need is a power conditioner…

Because to run your preamp, and all the other gear you add later…you’ll need to consolidate the power source for your rack to one device.

Here are some good options I recommend:

At this point, you have a working rack.  And here-after, you can add more items if and when you need them.

But most likely, the next thing you’ll need is a headphone amp, and here’s why:

Once you have the ability to record several tracks at once, you’ll be recording several musicians at once.  In which case, you’ll need a way for each of them to monitor themselves on headphones, while they’re recording.

The problem is…most audio interfaces have only 1 or 2 headphone jacks.  And a headphone amp is the standard solution if you need more.  Here are the ones I recommend:

Now sometimes, depending on the audio interface you started with…

You also encounter a problem if the maximum INS/OUTS are no longer enough to keep up with your new demands.  At this point, the only solution is to switch to a better interface that offers more.

And in this post, I recommend several suitable upgrades:

At some point, many folks eventually start double-checking how their work sounds across a wide-variety of playback devices, by routing multiple mixes to multiple monitors.

And once this task becomes a normal part of your workflow, monitor management systems offer an easy way to mix-n-match different sources with different outputs at the push-of-a-button.

And in this post, I recommend several good options:

Now that you have a vision of how your rack will one-day look…the next question to ask yourself is:

How many space will I need?

And here’s what you need to consider:

While your rack probably won’t have more than 5 items, some of those items may occupy more than one space.

So assuming your rack will be similar to the one I described in the first part of this post…a good range to start with is 6-12 spaces…8 being the ideal number in most cases.

What to Do with the Extra Spaces I guarantee you…that those ugly open spaces will piss you off.

But rather than waste money on unnecessary gear, just to make your rack look nicer…

A better solution is to cover the spaces with these blank panels – (1U/2U), which look awesome, and also allow better cooling for your gear.

Another option is to use those spaces for a drawer – (1U/2U) to store your random tools.

And one last accessory I recommend is a box of rack screws – (25 count/100 count), because you never seem to have enough when you need them. 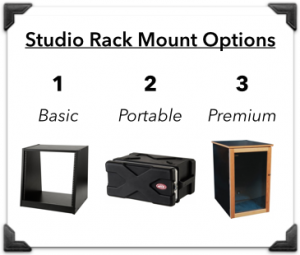 By this point, we’ve covered all the major questions about planning…

So the only thing left to do is find the right rack to buy.

After comparing the many options, what you’ll find is that all racks fit into 1 of 3 categories:

Here are the top options I recommend in each category: In my experience, the top 3 manufacturers of affordable racks for home recording are:

And to be honest, there’s not a huge difference between one brand and the next.

And the only real difference is which brand has the look you prefer.

In fact, in a goal to streamline product ranges and end the existing overlaps between Middle Atlantic and Raxxess products, the mother company Legrand AV decided to end Raxxess-labeled racks and only leave the Middle Atlantic ones.

More info on the subject here.

For Middle Atlantic, here’s what I recommend:

As you may have noticed, the Odyssey racks are a little more “heavy-duty” than the other two.

And that’s because they’re more of a “hybrid” between a studio rack, and this next category… 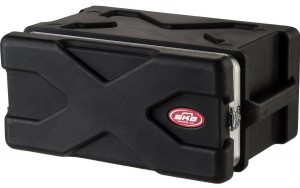 If you’re a musician, and you perform live, then SKB and Gator need no introduction.

Because for several decades now, they’ve been industry standards for live music.

You can almost guarantee he’s loyal to Gator instead.  And vice versa.

For SKB, here’s what I recommend:

While I wouldn’t recommend them for home studios…

If you really want the best of the best…

There are several high-end studio rack mount options such as the XRackPro, which offer brilliant solutions to common problems with studio rackmounting.

The XRackPro for example, has a soundproof enclosure, which reduces noise levels from your gear by up to 30dB and a silent fan. And some even have a tray for your computer as well.

Cheaper racks don’t offer this, mainly because soundproofing restricts airflow, which causes your gear to overheat.  However…

The XRackPro 2 handles this problem with silent exhaust fans which keep your gear cool without any additional noise.

Unfortunately, racks such as these often cost several thousand dollars each.  And even though you may not be able to afford one now, it’s still nice to know they exist if and when you can afford one later. 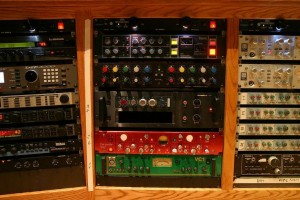 At this point, you can basically call it “complete”.

Pro studios often use hundreds of rackspaces filled with all sorts of fancy gear.

And while your studio will likely never reach that level, there are still several other things you can add…if you want.

Now I wouldn’t recommend these upgrades to most home studios…simply because unless you have money to burn…the huge price jumps simply aren’t worth the nominal gains.

But don’t worry…because you really don’t need all that fancy stuff anyway.  🙂