They still need to USE that studio to record some music!

The problem is…it’s actually way harder to create a decent audio recording than you might think.

And everything-to-do with the skills of the person using it.

Which means…to create anything worthwhile, you need to actually know what you’re doing.

Starting in this post, and continuing through all of chapter 5…

We will begin to cover the key fundamentals that all newbies should know when attempting their first recording sessions in their new home studio.

If you’ve never actually worked in a studio before…

And transform it into a real mp3 file that you can share with the world.

So in the following 6 articles, I show you exactly how it’s done:

Now let’s take a closer look at each lesson…

As I’m sure you can guess, recording a song is a complex process.

From beginning to end, its a series several hundred tedious tasks.

And for beginners it can be tough:

So in the following lesson, I break down in full-detail, the 4 basic steps of music production, which are:

To find out exactly how each step is performed, check out this post: Regardless of your musical style, vocal recording is the one skill that everyone wants to learn…

Because its the one part of a song that ALL listeners pay attention.

But unlike other instruments…

With vocals, so much of the control lies with the performer.  Which makes it tricky when your singer is inexperienced in the studio.

And so, to find out how to help your singers discover their true potential, check out this post: Once the vocals sound good, there’s still the matter of everything else.

In popular music, the 4 most common instruments you’ll need to record are:

Where a lack of adequate tools can make things more challenging.

And so, to learn how to record each of these instruments in your home studio with minimal resources, check out this post: When you start building your mic collection…

One of the first things you’ll notice in virtually every product description is a mention of the microphone’s polar pattern.

Cardioid, figure-8, and omnidirectional are the 3 terms you hear repeated over and over again.

Yet surprisingly, few people truly understand what these terms mean and how to apply them…if they’re even aware of them at all.

Which is unfortunate because the polar pattern is an absolutely critical piece of information that must be considered each time you pair any mic with any given recording situation.

Get this part wrong and your recording is doomed before you’ve even started.

And so, to learn more, check out this post: 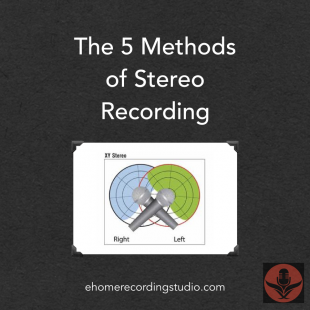 Once you have a detailed understanding of microphone polar patterns…

The logical next step in your education is to learn the art of stereo recording.

The sad fact is that most home studio owners never even attempt it.

And as a result, they wonder why their audio recordings sound so amateurish.

To learn exactly how you can use stereo recording to get that polished pro sound, check out this post: In today’s world of independent musicians working in bedroom studios…mixing on headphones has become standard.

And while it may not be ideal, the truth is, no one would do it if it didn’t have its advantages.

To find out exactly what those advantages are, and how you can apply them to your mixing, check out this post:

As you dive deeper into the world of audio recording, you’ll start to notice that you can hear things others can’t.

And that’s because, you begin to understand what SOUND actually is, and how our ears and brain use to interpret the world around us.

But before your ears can truly grasp these concepts…your brain must understand how everything works in theory.

So, to help speed up your learning curve, I’ve created the following 4 lessons:

Now let’s take a closer look at each one… Have you ever wondered exactly why we have TWO ears?

Well the theory states that through evolution, this system of “binaural hearing“, (binaural meaning “two-ears”)…

Was the most effective at allowing animals and humans to perceive directional cues from the sounds in their environment.

The first question you might be asking is…”How does it work?”

The second question you are definitely asking is…”How does it apply to my music?”

Well in this lesson I reveal the answer to BOTH… More than any other topic in music recording…

The subject of decibels is probably the MOST misunderstood.

Which is unfortunate because we as musicians work with it on a daily basis whether we know it or not.

Everyone thinks they understand it, but truthfully almost no one does.

Do some research on this topic and what you’ll likely find is a bunch of mathematical equations and scientific jargon that you can barely make sense of.

And that is why in this lesson, I’ve taken the time to break it down and explain it in a way that anyone can understand. 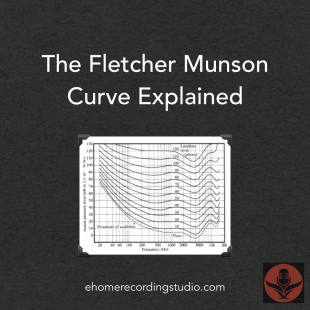 If you’re reading this post, chance are you’ve never heard of it…

Or you have, but have no idea what it is or why you should care.

But trust me, as you gain experience in this field, you will hear the term mentioned more and more.

And since you have to learn it eventually, what better time than right now?

I won’t go into detail on the subject now, but it basically shows us how the human ear perceives loudness at different frequencies. Of all the recent technologies that have made home recording possible…

The one that really got it started was Digital Audio.

Yet not surprisingly, since the subject matter can be dry at times…

Very few people understand much at all about this important topic.

So in this post, I give you the highlights, by revealing ONLY the most fascinating bits related directly to music production:

To learn more on this topic, check out this post: