If you’re like most people…your first contact with a harmonica (or harp as it’s often called) was probably when you were still a kid.

Therefore contributing to the idea that harmonicas are not “REAL” instruments…

But if you’re reading this article you probably know that this is all obviously incorrect.

Oddly enough, those same characteristics are also exactly what make them such great instruments…

You’ve come to the right place as I have in today’s post everything you need to know to get started with the harmonica.

Then let’s start.  First up…

The Two Types of Harmonicas 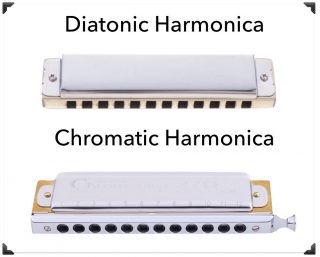 There are two main categories of harmonicas:

Now just in case you aren’t already familiar with them…

Let’s quickly review the differences between the diatonic and chromatic scales in the image below. So let’s now learn a bit more about how they work. Remember that “toy” harmonica we talked about? Yup, that’s a diatonic harmonica.

And, to be more accurate, the one you owned as a kid was probably a “Richter-tuned” harmonica.

As opposed to alternate tunings, such as minor harmonicas.

Diatonic harmonicas can only play the notes of a given scale…

Though with the help of some advanced techniques, you can actually play more notes, but we’ll cover that later.

In other words, if you want to be able to play all notes of the chromatic scale…you’ll need 12 different harmonicas, one for each key.

Now if this is your very first harmonica, a key of C diatonic is the best choice, since most instructions books and videos are made for this particular model, but also because you won’t have to bother with sharps and flats.

Now here’s an example of a typical “bluesy” sound you would normally get:

However, 10 holes diatonic harmonicas are vastly more popular than the 14 holes one, so you can mainly disregard the latter. These harmonicas can, as their name suggests, play all notes of the chromatic scale thanks to a button activated sliding bar.

One of its biggest ambassador in pop music is probably Stevie Wonder in songs such as “Isn’t She Lovely” or his part on Chaka Khan’s “I Feel for You”.

So how do they work?

Well, when the sliding bar is pulled, the it plays the diatonic scale of the key it is tuned to, and when the bar is pushed, all notes are sharpened, playing half a step higher.

Now, just like with diatonic harmonicas, chromatic harmonicas are available in all 12 keys, but since they ARE chromatic and thus able to play all notes by definition, most players prefer sticking to the C tuned ones.

Next up: Playing Techniques…

You play the harmonica by blowing air into it, or sucking air out of it which is called drawing. You can actually play more than the 20 notes available on them, using these two techniques:

and on the diagram on the right you’ll see all the notes you can obtain by blowing, drawing and overblowing/overdrawing.

Now, overblowing is a pretty advanced technique and you shouldn’t start learning it BEFORE you know how to bend notes…

So you can just disregard this technique for now.

Once you master these techniques though, you’ll be able to get a lot more notes out of your harp.

Watch this guy explain bending, which is the “signature sound” of the harmonica:

In addition to playing in C major on a C harmonica, you CAN play in other keys on this same harmonica, referred to as positions by harmonica players.

And in order to understand these positions, you should first take a look at the circle of fifths on the diagram below: 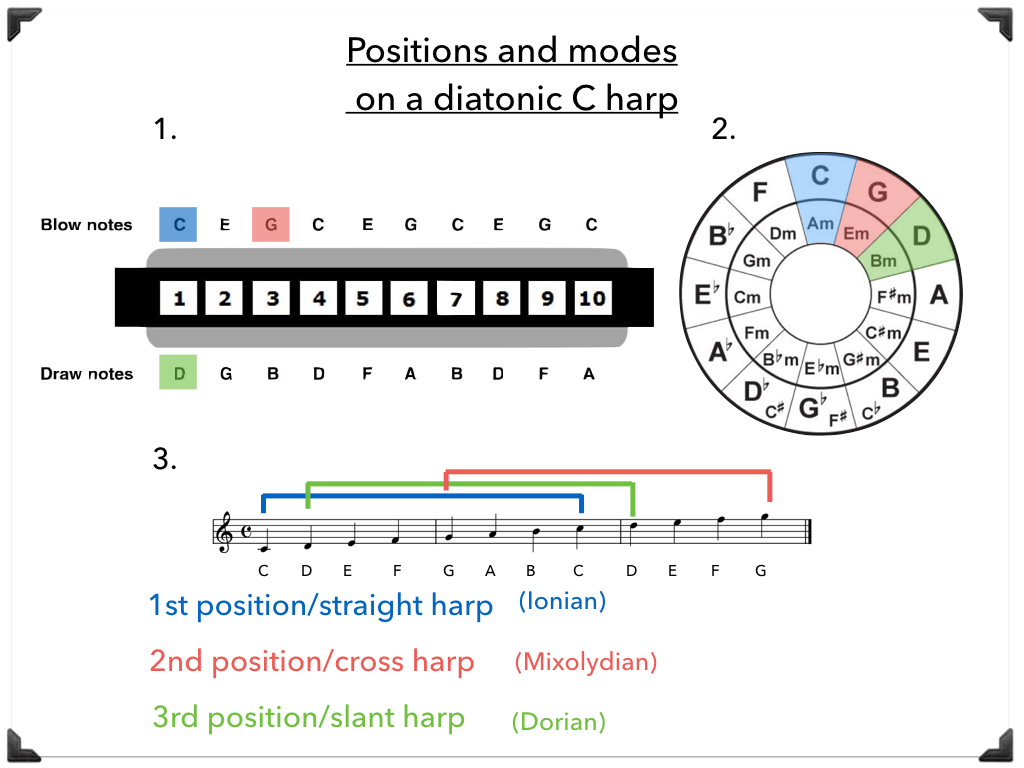 The diagram above shows the positions as seen on:

Each note on the circle corresponds to a position on the harmonica — or mode if you’re familiar with these.

For this article though, we’ll only focus on the first three positions as they cover the vast majority of the harmonica repertoire.

If you don’t know what modes are, just think of them as different scales that all use the same notes but organize them different, in order to achieve different musical effects.

One of the easiest other scale to play on a richter tuned harmonica is its relative minor, which is the letter in the inner circle. For a C harmonica, that would be the A minor scale.

Many more scales are available but in order to play all of their notes you need to be able to bend and overblow/overdraw.

Furthermore, some harmonicas with alternate tunings — such as natural minor ones — are made to be played in a certain position.

So here are the three most used positions:

To hear the differences between positions, watch this guy explain and play them:

So that’s what you need to know about positions.

Apart from their preset key. diatonic harmonicas are available in various scales…

Here are the most common ones:

If you’re unfamiliar with those minor scales, have a look at the video below to hear what they sound like:

But keep in mind that you CAN play a minor scale on a diatonic major harmonica, thanks to the techniques I mentioned earlier.

Now, just as I advised you to choose a key of C diatonic harmonica as your first choice…

In the case you want a minor tuned harp, I furthermore advise you to go with its relative minor, which would be a minor A tuned harp.

And the reason why is because a relative minor shares the same notes as its relative major, meaning that a major C and a minor A tunes harps can play the same notes, making it easy to switch back and forth between them.

Here are the natural minor and harmonic minor tuned harmonicas I recommend:

Got it? Then on to our next part… Apart from the classic diatonic and chromatic harmonicas, there are some “special” models out there that each have a different purpose.

For this part I’ll be covering the following models:

Tremolo harmonicas have two reeds per note, one tuned slightly down a reference pitch, and the other one slightly above it.

This creates a vibrato/tremolo effect, hence the name of the instrument.

Have a look at this video to hear what is sounds like:

If you dig this sound, here are the tremolo harmonicas I recommend:

As their name suggests it, bass harmonicas play in the lower range.

Ans the upper part is tuned half a step above it.

Check out this video to hear what they sound like:

Now, these are some pretty expensive instruments, but if you ever feel like experimenting one, here is the model I recommend:

Chord harmonicas were created as a quick and easy way to access up to 48 different chords.

Just like bass harmonicas, chord harmonicas are made of two parts:

Check out this video:

Here are my recommendations: