Nowadays that virtually all music recording has gone digital…

The first question on every musician’s mind when first starting out with music production is:

Which computer should I get?

Though as I’m sure you already know, there is no “one-size-fits-all” answer.

Because depending on factors such as:

YOUR ideal option might be completely different from someone else’s.

Which is why for today’s post, I intend to show you everything you need to know to find the perfect computer/laptop for YOUR setup.

So let’s begin. First up…

More and more these days, as technology becomes increasingly “mobile“…

Desktop computers are slowly becoming a thing of the past.

Yet for music recording, they’re still what all the pros continue to use.

Despite all these advantages, the ONE thing that desktop computers lack is…PORTABILITY.

And in today’s world of DJ’s and mobile studios, the portability of a laptop is a MUST.

Plus…since most of us use a laptop for school/work anyway, it eliminates the need for 2 separate purchases.

Now at this point, I’ll assume you’ve already decided whether a desktop or laptop computer is right for you.

Want to know the easiest way to piss-off a recording geek?  Here’s what you do:

If he uses a PC in his studio, tell him Macs are better.b

If he uses a Mac, tell him PC’s are better.

Because for some strange reason, this topic incites violent debates…that last forever, and result in no real conclusions.

In fact, I absolutely HATE giving my opinion on this topic.

But here it is anyway:

Personally, I like Macs.  Not just for recording, but for everything.  And these days, most of the music world (and the rest of the world) agrees.

If YOU agree as well…get a Mac.

If none of these 3 things apply to you…get a Mac.

But whichever side you choose, just know that tons of great music has been created on either one, and this topic isn’t nearly as important as some might have you believe.

Assuming you’ve made your decision…let’s move on.

With Mac desktops, you have 4 options:

Now here’s how they compare:

For studio recording, there’s probably nothing better.  Peek your head into any pro studio…and odds are, that’s what you’ll find.

And the reason why is because it’s the only model that’s made to be easily upgradable, whichever part you’re looking to switch.

Now, up until not so long ago, the Mac Pro was just overkill for most of us, whether it was in terms of specs, or price.

There is a serious, brand new contender on the desktop mac scene: the iMac pro.

The iMac pro is simply the MOST POWERFUL all-in-one computer to date, by a long shot

Now, one look at the base model price and you’ll understand why this model is not for everyone… And don’t even look at the price of the fully upgraded model if you’re faint of heart..

But if you’re looking for the most powerful mac out there and don’t mind making a (very) long-term investment, the iMac Pro will have you covered for — at the very least — the next decade.

Now for the overwhelming majority of us who can’t afford the iMac Pro, the next option is probably the best: the regular iMac.

While not nearly as powerful, the regular iMac is equally as practical for a typical beginner’s setup.

If you can afford it, it’s quite likely the ideal choice for most home studios.

If you CAN’T however, your final option is the Mac Mini.

How many times have your heard someone say:

I want to get a Mac, but they’re too expensive 🙁

Well the Mac Mini is proof that this is not entirely true.

And quite surprisingly, while the older models were definitely not on par with the iMac or Mac Pro in terms of speed…

The newer models, and especially the boosted ones show surprisingly good performances on the benchmark, and in some cases even outperforms the regular iMac.

It may not have the speed or flexibility of the more expensive models…but it offers ALL the benefits of the Mac OSX, for a very modest price tag.

For those of you guys who build custom PCs…

If you can assemble something faster and better than a Mac Pro…go for it.

I wouldn’t dare try to convince you otherwise.

If however, you DON’T fall into this category, and you really don’t know much about computers at all…

Then I suggest staying away from PC desktops altogether.

If you’re NOT a huge PC fan, the only reason to choose a PC for your studio would be if you’re a beginner trying to save money.

And since the main benefit of desktop computer is MORE PROCESSING POWER, it makes little sense to get any desktop that isn’t blazing fast.

So if you only have $500 to spend, you might as well get a laptop, so you can at least have some portability as well.

Having said that, let’s move on…

Here are 5 potential issues to look out for:

With Mac laptops you have 2 options:b

My best guess is…Macbook Pros are the single most popular laptops for home recording.

Then the Macbook Air come in at a distant 2nd place.

It’s not as fast, and it doesn’t have nearly as many inputs, but it’s extremely thin and lightweight!

So there you go.  Check them out:

On one hand, PC laptops are GREAT…

Because you have a virtually unlimited number of options to choose from.

On the other hand, PC laptops SUCK…for the exact same reason.

And what I mean by that is…

While it’s nice to have options, the more options you have, the harder it is:

And unfortunately, for music production, there is no clear-cut winner that stands out from all the others.

They als tend to be used by

So here are 7 of the most popular and powerful options when it comes to professional,

Now, I tried and select models that have the latest AMD Ryzen chips, as they completely blew Intel’s out of the water in term of processing power with their 4th gen Ryzen CPUs…

And Intel probably won’t be able to catch up on AMD for the next years or so.

So if you can, do yourself a favor and choose an 4th gen AMD Ryzen CPU (or newer), you’ll get some serious power for your money.

One important point worthy of mention that rarely gets discussed…

Is the system requirements for your DAW of choice.

Even though these days, most computers are compatible with most DAW’s…

In some rare cases…they’re NOT, so you should always double check just to make sure.

If you don’t have a preferred DAW yet, or don’t even know what a DAW is, then don’t worry about this part.

However for those of you that DO, here are the links to the system requirements for each of today’s top DAW’s:

Once you’ve finally chosen a computer, next come the ACCESSORIES.

For recording studios, the 3 accessories I recommend are:

Now here’s what you want from each one…

While any old keyboard will do…

Your ideal keyboard should include 3 features:

NOTE: Even if you have a laptop, you may still find it worthwhile to buy an external keyboard.  That’s how useful they are.

Now here are my 2 favorites:

For those of you who prefer the feeling of a mechanical keyboard, here are some of the best models available:

Again…while any old mouse (or trackpad) will do…

With a really good mouse…

A few programmable buttons can give you access to your most frequently used DAW shortcuts without ever touching your keyboard.

And this one tool can speed up your workflow significantly.

While there are an almost infinite number of these mice to choose from…I suggest Logitech.com as a good place to start your search.

My personal favorite mouse in their line is the Logitech MX Ergo – (Amazon/B&H).  If you’re not sure what to get, I highly recommend it.

For some other great options, check these out as well: 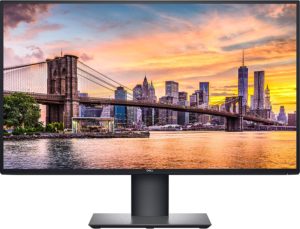 When you first start out with home recording…

You probably won’t recognize the value of REALLY GOOD monitor right away.

But eventually, after working without one for a while…

Any one of these problems alone is annoying.  All 3 together will drive you crazy.

And once that happens, I highly suggest getting a good external monitor.

For a good high-end option, here is an example of something that would work well:

As an alternative, any standard monitor (such as this one) will work almost as well, such as he HP 27er.